The name Amazonas , which was transmitted from the river to the region and, later, to the largest state in Brazil, is due to the Spanish Francisco de Orellana, who in 1541 claimed to have fought a tribe of hardened women. He compared them to the Amazons, legendary warriors who amputated the right breast to better manage the bow.

Crossed by the equator in its northern portion, the state of Amazonas is limited to the east with Pará, to the north with Roraima and Venezuela, to the west with Colombia and Peru, and to the south with Acre, Rondônia and Mato Grosso . It is the most extensive of the Brazilian states, with an area of ​​1,577,820km2, which represents almost a fifth of the national territory. The capital is Manaus.

About 61% of the Amazon’s surface is below 100 meters, 32% between 100 and 200 meters and only seven percent above 200m of altitude. However, it is in the state that Brazil’s culmination is found, the 3,014m peak of Neblina, in the Imeri mountain range, close to the border with Venezuela, on the crystalline plateau.

Four units make up the general morphological picture. The low sandstone plateau, locally called terra firma, because it is out of the biggest floods, covers, with its vast tabular surface, much of the state. In it, the Amazon River and tributaries opened large gutters, which partially filled with their alluviums, giving rise to the second morphological unit, the alluvial plain or floodplain. To the north, the crystalline plateau extends, with a wavy surface, dominated by mountainous alignments along the Venezuelan border. For the most part, Amazonas is made up of recent sedimentary terrains (from the Quaternary period).

The climate is hot and rainy, like the Köppen type. The average annual temperature rises to around 26o C and the total rainfall to 2,500mm. With the exception of the eastern region, where there is a clear dry season in the months of July and August (Am climate), the state receives rain throughout the year. Because they are heavily washed by the rains, terra soils are generally low in mineral nutrients. The floodplain soils, which are subject to flooding, are periodically renewed by deposition of alluvium, while remaining fertile.

The drainage network is commanded by Amazonas, which, along with the main tributaries, maintains a course that is open to navigation up to the limits of the state. Along the rivers there are numerous lakes, among which are those of Coari, Badajós, Piorini and Canaçari.

According to Smartercomputing, the population of Amazonas is one of the most rarefied in the country, with a demographic density of less than 1.4 inhab./km2 in the early 1990s. The geographical distribution of the population along rivers reveals dependence on river transport and preference for soils of floodplain. About two-fifths of the state’s population live in rural areas. This rural population is almost entirely made up of “caboclos”. There are a large number of Northeasterners and their descendants, attracted by the heyday of rubber. Portuguese, Japanese, Syrian-Lebanese and Spanish make up a small but economically active contingent of foreigners. In the state, there are 33 indigenous groups, whose population is increasingly smaller, destroyed by disease, clashes with civilized people and lack of economic elements for survival.

The main city in the state is Manaus, which in 1980 concentrated almost half of the Amazonian population. In addition to political and administrative capital, international port and industrial center, Manaus also performs, in relation to trade and services, the functions of regional capital for a vast area, which includes, in addition to the state of Amazonas, Acre and Roraima. The second city in the state is Parintins, located on the right bank of the Amazon, close to the division with Pará; the third is Manacapuru; the fourth, Itacoatiara, on the left bank of the river and connected to Manaus by 286km of road. All with just over fifty thousand inhabitants in the early 1990s.

Extractive and agropastoral activities. The exploitation of forest resources is of great importance in Amazonas, although the global value of the products collected does not exceed that of agropastoral farmers. The main extractive product is rubber, exploited mainly on the margins of the southern tributaries of the Amazon (Madeira, Purus and Juruá). Next are Brazil nuts, non-elastic gums and piassava.

Among the natural resources, those of plant origin are the most important in the state and allow the extraction of rubber, nuts, wood, oilseeds and fibers, which are still exploited according to primary methods and in an insufficient way. The possibilities for mineral extraction are increasing (iron, manganese, lignite, cassiterite, oil, gas). There are references to the existence of plastic clay, feldspars and limestones, in the lower Amazon. The rivers and lakes in the Amazon are quite fishy, ​​and their forests are home to a variety of fauna, which guarantees an important activity in the hunting sector.

Agricultural activities are carried out in lowland soils, especially in the stretch located downstream from the mouth of the Purus. Jute, guarana and cassava are the main products. In terms of production value, the three cultures together surpass rubber. To a lesser extent, bananas, sugarcane, beans and oranges are also grown. In the floodplain fields, cattle are raised.

Virtually all of the state’s manufacturing activities are concentrated in the city of Manaus, which has rubber, Brazil nut and wood processing establishments, wheat mill and jute weaving, in addition to the Manaus oil refinery.

The Manaus Free Trade Zone, which began to be implemented in 1967, gained greater expression as an autonomous industrial center from 1972 onwards. The venture contributed, in particular, to the progress of Manaus.

Among the mineral wealth of the state are iron, manganese, lignite, cassiterite, oil and natural gas (basins of the middle and lower Amazon, respectively with 300,000 and 100,000 km2).

Amazonas does not have railroads

The road network, of which just over a third is paved, comprises the BR-319, which connects Manaus to Porto Velho RO and intercepts, in Humaitá, the Transamazônica (BR-230), which crosses the south of the state; the BR-174, which connects Manaus to Boa Vista RR; and a state road connecting Manaus to Itacoatiara. Most of the transport is, however, carried out by means of rivers, which offer good conditions of navigability. In this regard, the Amazon River stands out, which, in addition to a large volume of water, has a very gentle slope, since from Benjamin Constant, on the border with Peru, to its mouth, it descends only 65m. This circumstance allows the port of Manaus to receive large draft ships.

The most important cultural entities in the state are the Geographical and Historical Institute of Amazonas, the National Institute for Research in the Amazon, the Amazonian Academy of Letters and the Commercial Association of Amazonas, all in the capital. The Federal University of Amazonas was founded in 1965.

Of the libraries registered in the state, the most important, in addition to those belonging to the entities above, are the Public Library of Amazonas and the Central Library of the University of Amazonas. Several municipalities, IBGE agencies and religious missions maintain small public libraries. Among the museums, it is worth highlighting the Homem do Norte, the Indian and the Natural Sciences.

The only center of tourist attraction in the state is the city of Manaus. In addition to the Amazonas Theater, the following monuments stand out in the city, in addition to the Amazonas Theater, built in the golden era of rubber in the Italian Renaissance style: the Rio Negro palace, seat of the state government; the Rio Branco palace, where there is an excellent collection of numismatics; the Palace of Justice and Commerce; the Hotel Amazonas; the Customs building; the cathedral of Nossa Senhora da Conceição.

Another tourist attraction consists of boat trips along the Negro and Amazon rivers, especially in the area where the waters of the two rivers meet, in different colors. Other points of interest are the natural pools of Flores, Turumãzinho and Bosques; the river beaches of Ponta Negra and Cacau Pirera; and the Turumã Grande waterfall. The best time for fishing is the period from September to November.

Among the popular festivals, the most important are the revelry of São Benedito, the festival of São Roque (August 16), the festival of the Divine (Pentecost Sunday), Alumiação (November 2). It is also worth mentioning the Boi de Reis; the Boi-Bumbá (variant of the bumba-meu-boi do Nordeste), which takes place during the São João festivities; and Meia-Lua, a river procession on the Amazon River.

A region of very rich folklore, there is a whole series of legendary entities of indigenous origin in Amazonas, among which we must highlight the urutau, symbol of stillness; the maguapari, a forest monster; the boto, to be enchanted in fish; the uirapuru, an enchanted bird; the muiraquitã, a talisman of green stones; the boiuna, to whom the most improbable events are attributed; the curupira, demon of the forest, represented by a dwarf with red hair and feet in reverse; the mapinguari, a fabulous animal, similar to man, but all hairy; the poronominare, hero of a cycle of adventures; and the uiauara, haunting goblin.

The typical Amazonian cuisine is also quite diverse

The most famous dishes are abunã or arabu, mush of turtle eggs or other chelonian, with flour and sugar; the farofa do hoof, served with a turtle dish; maniçoba, manioc flour casserole, which is eaten with stew; pacicá, a delicacy prepared with the kids of the turtle, seasoned and cooked in the shell itself; the oven chest, a turtle bite, seasoned with lemon, salt and pepper; tacacá, papa de gum that joins tucupi, which is in turn, one of the traditional sauces of the Amazon. 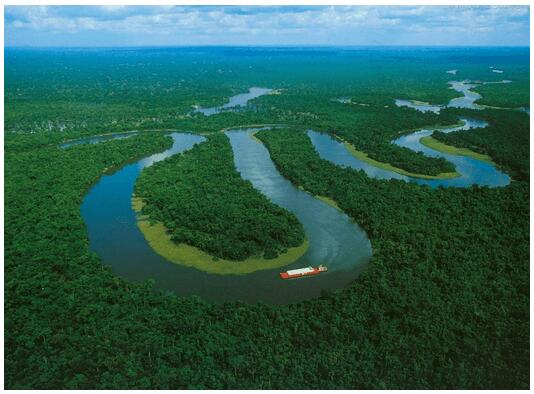 State of Amazonas
Tagged on: Brazil