The Seychelles archipelago is one of the most exotic and beautiful travel destinations on earth. You can regularly see the dreamy, white beaches, the palm trees in the background and the blue sea as a location in commercials. The archipelago also offers many possibilities for excursions into the islands’ primeval forests and is home to several rare animal and plant species.

The Seychelles are not far from the East African coast in the Indian Ocean. The capital of the former French colony is Victoria. Most of the people here speak the Seychelles Creole, but the official languages ​​also include English and French.

In the following we present you the most exciting tours, the most beautiful attractions and the best sights in the Seychelles. 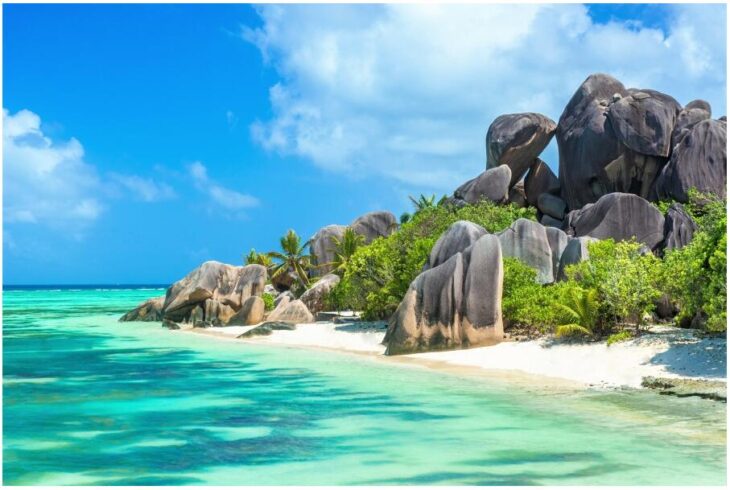 1. Victoria: capital of the island state

Victoria is the capital of the Seychelles and the first destination for many travelers. Even if Victoria is referred to as the smallest capital in the world – after all, Victoria has only around 26,000 inhabitants – there are still some sights to discover here. One of the first places to go is Victoria Market, which is only open until 12 noon.

In addition to the many small shops, there is also the Hindu temple Arul Mihu Navasakthi, the Cathedral of Victoria and the clock tower in Victoria. It is also worth trying Creole cuisine in one of the many restaurants, especially for fish lovers. The local cuisine is a mix of Asian, Indian, South African and European dishes. The octopus curry, for example, is a specialty.

Anse Source d’Argent on La Digue Island is one of the most popular and most visited beaches in the Seychelles. The reason for this should be immediately apparent to every visitor: white sandy beach meets turquoise-blue, shallow water and the gray granite rocks rise in the background. This beach has often been used for filming films and commercials in the past.

It may be the most famous beach in the world. Anse Source d’Argent is protected from the tide by an offshore reef, the water here is mostly calm and therefore very family-friendly. The beach is also great for snorkeling. It can be easily reached via the L’Union Estate park, the path is signposted.

The St. Anne Marine National Park is located between the islands of St. Anne, Cerf, Long, Round and Moyenne. In 1973 the marine area was placed under nature protection, making it the first marine reserve in the Indian Ocean. Exploring the underwater world is particularly worthwhile in the months of the northwest monsoon, i.e. from October to April. Since fishing is no longer allowed here since the area was placed under nature protection, the biodiversity and the amount of marine animals is impressive.

About 150 species of fish and other marine life inhabit the St. Anne Channel snorkeling areas. The entrance fee is also used to finance the nature reserve. However, the park not only includes the coral reef and the underwater world, it also includes the surrounding islands. Lush flora and fauna can be admired on the hiking trails.

Curieuse Island is home to several natural attractions and is one of the most secluded and natural islands in the Seychelles. It used to be called Île Rouge, the “Red Island”. It received its current name from the French explorer Marion Dufresne, who named it after his ship in 1768. What makes the island so special are its natural treasures.

Here you can find the Coco de Mer, the largest coconut in the world. The Coco de Mer can weigh up to 20 kg. You can also explore a large number of mangroves here, where with a little luck you can find one of the giant tortoises. There is also a breeding station for the animals on the island. The rare hawksbill turtle is also native to Curieuse.

Morne Blanc Island should be of particular interest to hiking enthusiasts. The goal of a Morne Blanc tour is the 905 meter high summit of the island. On the way to the summit, several tea plantations and tropical forests are crossed. Lichen, moss, ferns and dense undergrowth line the trail up to one of the best viewpoints in the Seychelles.

The successful hiker has a spectacular panoramic view up here. The Morne Blanc is home to many species of birds and also the smallest frog in the world. Because of its size of only 1 cm, this should be very difficult, but it is very likely that you will at least hear it. The Sooglossus gardineri is surprisingly loud for its size.

Vallée de Mai is another national park, this time on the island of Praslin. The German name is also Maital. Vallée de Mai was added to the UNESCO World Heritage List in 1983. The Vallée is a valley and with 19.5 hectares it is the smallest world natural heritage site in the world. At the same time, the forest is the largest intact forest in which the Coco de Mer grows. The special thing about the forest is that it already existed when the Seychelles still belonged to the great continent Gondwana.

So when the archipelago was connected to Africa, South America, Australia, India, Madagascar and New Guinea millions of years ago. Well-kept paths lead through the jungle and let you explore the exotic flora and fauna. In the Vallée, for example, the Seychelles Black Parrot is native, as well as the Praslin Snail, the Seychelles Tree Frog or the Green Day Gecko.

The mountainous island of Silhouette is located about 20 km from the northwest coast of Mahés. The mountains on the island are 751 meters high, the island forms the third largest island in the Seychelles. At the same time, Silhouette is hardly inhabited by people, making it the ideal destination for nature-loving hikers.

The low level of development is due, among other things, to the steep rock walls and the hard-to-reach coast. A few accommodations and hiking trails, there is no more civilization on the island. The Anse La Passe beach on the island is protected by a reef and invites you to swim and snorkel with its bright blue water.

Bird Island is arguably one of the smaller attractions among the Seychelles. The northeastern island, 100 km from Mahé, has a manageable size with a length of 1500 meters and a width of 800 meters. The small island is primarily home to millions of sea birds, especially the black tern.

The island serves as a breeding ground for her every year. Especially in the period from April to October, the visitor is offered a real spectacle, which not only die-hard bird lovers get into raptures. Even outside the breeding season, numerous bird species can be observed on Bird Island.

Anse Lazio is considered to be one of the most beautiful beaches in the world, of which there are certainly not a few in the Seychelles. The white sand, the clear blue water and the white granite rocks make for uniquely beautiful holiday photos. Anse Lazio is located on Praslin and is one of the island’s absolute attractions.

The beach can be easily reached by car, there are parking spaces nearby, and there is also a bus stop here. Anse Lazio is one of the beaches that have been developed for tourism, which is why it is always well visited. There are several restaurants and a bar for your own well-being.

Most of the dream beaches in the Seychelles are actually often deserted, even in the high season. Due to the low number of visitors and the very sustainable approach to tourism, everyone will find their own personal piece of paradise on the magical islands.

But you have to share your luck at the Beau Vallon on Mahé, probably the most popular and liveliest beach in the Seychelles. Nevertheless, the bay is one of the most beautiful sights for us, because nowhere else can you experience the casual beach life of the locals up close, enjoy fresh coconuts at sunset or treat yourself to a freshly grilled tuna steak from one of the stands for lunch. 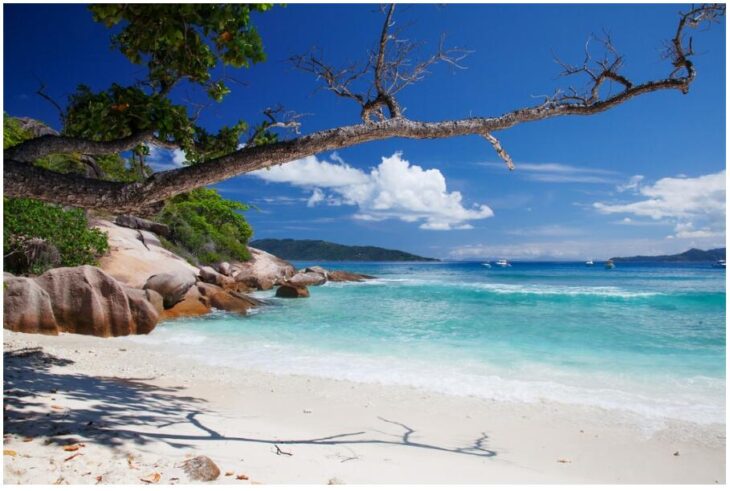