The 86 km² island of Mykonos currently has over 10,000 inhabitants in two districts and various villages, it is part of the Cyclades archipelago in the southern Aegean. Together with the neighboring islands of Delos, Rinia and several smaller islets, it forms the Mykonos regional district of the same name. According to a Greek legend, it consists of giants frozen to stone that Hercules is said to have thrown into the sea.

It owes its current name to Mykon, the grandson of the ancient god of light Apollo. The indigenous people are said to have been Karer from the area of ​​southwestern Turkey. A good 3,000 years ago, the Ionians followed, followed by the Romans and Byzantines by the 12th century. Between the 13th and early 18th centuries, the Catalans, Venetians and Ottomans conquered the island. After the Greek Revolution in 1829, Mykonos benefited from increasing sea trade, but lost its importance with the opening of the Corinth Canal in 1893.

In the following we present you the most exciting tours, the most beautiful attractions and the best sights on Mykonos. 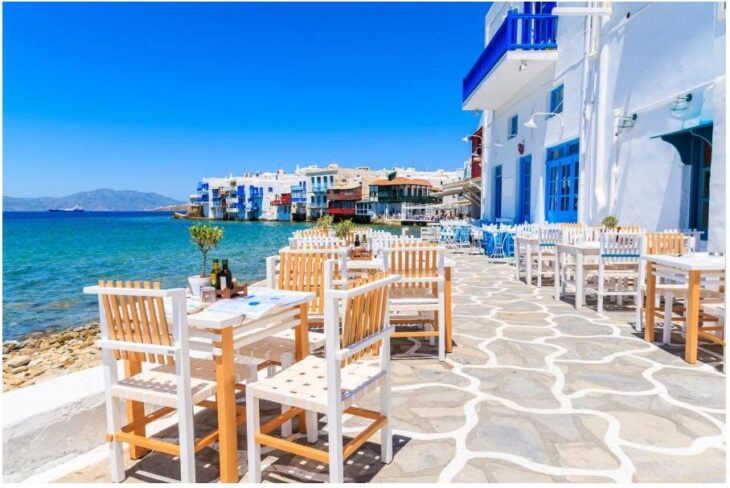 The Museum of Archeology, which opened in 1902 near the port of the capital, has been one of the most famous and most visited sights on Mykonos ever since. Here mainly finds from the “city of the dead” (necropolis) on the neighboring island of Delos are exhibited. You can also see artifacts from the 5th century before the beginning of our era, which were found on Rinia in 1898.

The museum houses a considerable number of ancient amphorae, gravestones and ceramic objects as well as jewelry and clay statues from a period of over 5,000 years. The building has been expanded and rebuilt several times in the past, and the large exhibition room to the east was added in 1972.

The 16 windmills on Mykonos are among the most photographed sights on the island. Seven are clearly visible on a hill above the capital at the entrance to the port in Alefkandra. From there you have a great view of the sea and the city. Most of the mills were built during the Venetian rule in the 16th century.

However, some of them also date from the early 20th century. Today none is in operation, but a mill houses a small agricultural museum with a stone wine press. All mills were built in the typical Cycladic style as round buildings with a white facade, conical roofs and very small windows. You have to admit: every Mykonos vacation includes a windmill photo!

Directly below the windmills, in the westernmost part of Mykonos town, lies the picturesque Alefkandra district with its numerous medieval houses, one of the most beautiful sights on the island. The buildings are often photographed by tourists because of their brightly painted wooden balconies. The locals also like to call the quarter Little Venice.

From the terraces of the many cafes, bars and restaurants you can admire the breathtaking sunsets over the sea with a coffee, a glass of wine or a delicious cocktail. The district is only a few steps away from the windmills, and it is also only a five-minute walk from the Fabrika bus station.

The maritime museum has welcomed its visitors since it opened in 1985 in a historic building from the 19th century in the central Tria Pigadia district of Mykonos Town. The house, which received the prestigious World Ship Trust’s Award, was the first of its kind in Greece to extensively reconstruct and exhibit historic ships.

One of the gems of the collection is the Armenistis lighthouse, built in 1890, which is now in the museum’s garden. There are also numerous impressive historical tombstones of seafarers from Mykonos and Delos. The house is often the venue for international conferences, and the Greek Navy also regularly hosts a maritime week here.

The sacred building, built between the early 15th and 17th centuries in the Kastro district of the capital, is one of the largest of its kind on the island. It actually consists of the five individual churches Sankt Anargyroi, Sankt Anastasia, Sankt Eustathios and Sankt Sozon, which have been joined together over time. The building owes its strikingly unusual shape to this fact.

The name refers to the construction method and is explained by the location of the entrance, which at the time also formed one of the gates into the city district. The church also houses a folklore museum with lots of old photographs, ceramics, musical instruments, textile works and tools. 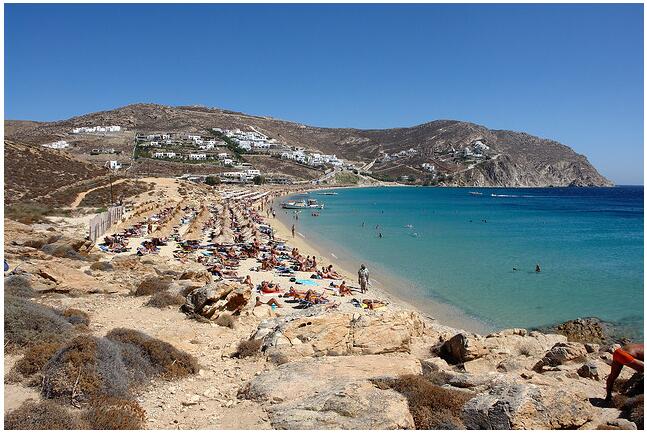 Since 2013, a large symposium with numerous exhibitions, art performances and film screenings has been held on the island every two years from the end of June to the beginning of July. The Biennale, initiated by the well-known and successful Greek artist Lydia Venieri, has since attracted numerous visitors from all over the world. Galleries, museums and restaurants serve as locations for the individual events.

But even windmills, churches, schools and department stores are used. The island’s vineyards have also served as stages for large celebrations in connection with the biennial. In 2015, three of the participating film directors received the Golden Pelican Award for the first time. The curious name is reminiscent of the island’s former mascot, Petros – the pelican who lived in the port from 1958 to 1986 and is still shown on postcards to this day.

There are numerous beautiful beaches around the island, which are particularly popular with bathers in summer. On the east coast, Tourlos, Agios Stefanos and Megali Ammos as well as the pleasantly quiet beach of Agios Ioannis with great snorkeling opportunities are recommended. The choice is much larger on the south coast, where especially the beaches of Ornos and Platys Gialos are frequented by many families.

Paranga and the beaches Paradise and Super Paradise, which are known for their party atmosphere, are popular with nudists. Elia Beach is ideal for water sports, there are rental stations for water skis and wakeboards. In front of Kalafati is a well-known diving area with several shipwrecks. On the north coast are the beaches of Agios Sostis, Ftelia and Panormos.

Excursion boats leave the port in Mykonos town three times a day, except on Mondays, to the small, just over 3.5 km² neighboring island of Delos. The journey time is approx. 30 minutes. There are also crossings from Platys Gialos and Paranga Beach to Delos. Delos was considered a sacred place for all Hellenic tribes in antiquity; the deities Artemis and Apollo are said to have had their seat here.

Of the numerous former temples, the Doric style Temple of Apollo from the 4th century BC is the largest. On the island, now inhabited only by employees of the excavation site, which has been a UNESCO World Heritage Site since 1990, people have not been allowed to be born or buried for a good 2,500 years.

9. Parties and nightlife in Mykonos

Mykonos has been enjoying an unbroken boom as one of the most popular islands in Europe for years. The particularly liberal island has been a popular holiday destination for homosexuals since the 1980s, who have had a formative influence on the high-class and extremely stylish party life on Mykonos. International stars and celebrities now come to the island every summer, and a large number of luxury hotels vie for discerning pleasure-seekers.

On Mykonos: “Anything can, nothing has to”. The nightlife is not forced on anyone, you can wonderfully plan a relaxing and beach vacation without even coming into contact with exuberant celebrations. If you are in the mood for unusual parties, we would be happy to reveal some hotspots: Tropicana Beach Bar on Paradise Beach, Scandinavian Bar in Downtown, The Queen of Mykonos in Chora and of course the Paradise Club Mykonos with the world’s best DJs!

10. Diversity on the neighboring island of Tinos

The neighboring island of Tinos, about ten kilometers to the north-west of Mykonos, is also suitable as a beautiful excursion destination. The journey time with the regularly operating ferries is around 40 minutes. According to Greek mythology, the wind god Aiolos was born here. Famous sculptors of the 19th century such as Nikiphoros Lytras (1832-1904) and Nikolaos Gysis (1842-1901) also came from the island.

Sights on Tinos include the imposing natural monument of the 641 meter high Exomvourgo mountain as well as the Museum of Tiniotic Artists and the Museum Giannouli Chalepa in the northern district of Panormos. The pilgrimage basilica from 1823 in Tinosstadt is the destination of tens of thousands of pilgrims every year on March 25th and August 15th (Assumption of Mary). 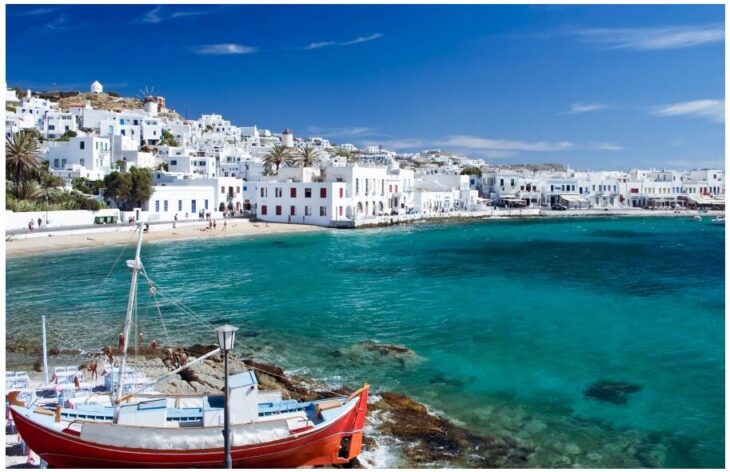 Sights in Mykonos
Tagged on: Greece