The view from St. Isaac’s Tower is impressive and costs only a few euros. 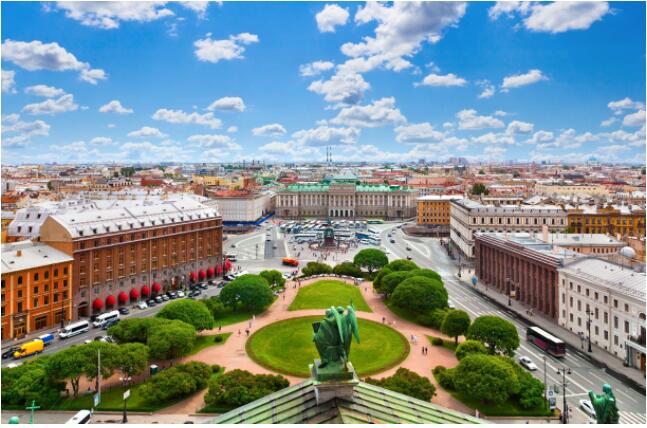 You can fly directly to St. Petersburg from Helsinki, as Finnair operates at its best up to five times a day. Round-trip flights cost more than 100 euros at their cheapest. Flight time is about an hour.

From the city’s Pulkovo Airport, you can reach the city center by first taking a taxi or bus number 39 or 39Ex to Moskovskaya Metro Station, from where you can continue your metro journey to the city center. Due to traffic jams, a metro connection can be an even faster way to travel to the city center than a direct taxi ride.

If you are traveling by plane to St. Petersburg, you can obtain a free e-visa for the trip .

By train, bus or even your own car

St. Petersburg is so close that it is easy to travel to the city either by bus or train. You can also travel with your own car, but it is worth noting that driving in Russia has its own risks due to the different traffic culture and the poor condition of the road. Border formalities also often take a long time.

The train from Finland to St. Petersburg takes several shifts a day, and the Allegro train takes about three and a half hours in its direction. You can hop on board the Allegro from Helsinki, Tikkurila, Lahti, Kouvola and Vainikkala stations.

Trains from Finland arrive at Finljandski station, which is located quite close to the city center. Next to the train station is a metro station with quick access to Nevsky Prospekt in the city center.

Traveling by bus from Finland to St. Petersburg takes considerably more time than traveling by train. The travel time from Helsinki is about eight hours, but you can also get a bus from Lappeenranta, which means that the travel time is shorter.

Savonlinja and Lux ​​Express, for example, run regularly between Helsinki and St. Petersburg. Tickets cost ten euros one way in the cheapest way, so traveling is much cheaper than by train.

You can choose a day in St. Petersburg or a one- or two-night hotel package. The boat trip leaves in the evening and arrives in the morning.

There are many hotels in St. Petersburg, but at the level of western metropolises, the city is not yet above its hotel offer. There is a considerable number of luxury hotels available, as well as large Soviet-era hotels that have become obsolete and have been renovated with varying degrees of success. Instead, there is even a shortage of high-quality and modern mid-range hotels in the city. Good modern options include the newer Sokos hotels.

Excellent accommodation in the city center is often provided by mini-hotels, which were established in abundance in the 2010s. St. Petersburg is also already approaching the European average in terms of hostel offerings.

Hotel accommodation is on average quite expensive. The price of accommodation rises for the summer season, ie May – September, when the season is at its hottest.

During the summer season, you should book your hotel reservations well in advance online or rely on the travel agency’s package tours. The hotel package provided by tour operators to St. Petersburg can even become cheaper than self-made arrangements if the trip is in the last place. You should research the offers and compare the prices carefully.

Airbnb accommodation should only be considered if the traveler has a visa, as it cannot be combined with a visa-free cruise.

Getting around and buses

The easiest way to get around the center of St. Petersburg on foot and by metro, which is the most efficient and reliable means of public transport in St. Petersburg. Beautiful metro stations are also one of the city’s attractions. During the Soviet era, metro stations were intentionally built to be as spectacular as possible and decorated with art, such as statues and chandeliers.

The subway is simple to use, but even in the subway, the crowd is tough. Especially on weekday evenings around 4 pm-7pm the subways are full. However, the metro is the only way to avoid traffic jams and move quickly and reliably from one place to another.

Due to the watery soil, the St. Petersburg subway runs very deep, and it is worth taking the time on the huge long escalators. Today, the use of the metro is facilitated by the fact that stops are already marked in Latin letters in many places.

There are also trolleys, buses and minibuses in the city, the latter of which stop anywhere. However, the use of different buses can be difficult for a non-linguist, and is also hampered by constant and chaotic traffic congestion.

Remember that bridges are raised for the night

In the nightlife of St. Petersburg, it is worth remembering that almost all the bridges over the Neva River are lifted up for the night and moving from side to side is awkward in the morning hours. If the hotel is on a different side from your nightclub, leave in time or stay until the bridges reopen!

Getting a taxi is a good option at night when the subway is not running. Official taxis are quite cheap, but prices usually go up overnight. Taxis can be requested from the hotel. The most important principle is that the price is agreed with the driver in advance. Taxis will also be able to fold the journey along the western bypass if in the middle of the night there is a need to move from the center south of the Neva River.

As in the past, there are many so-called folk taxis in the city. Any car can take passengers and transport them for a fee anywhere. However, for tourists, and especially those without language skills, the use of folk taxis is difficult and not recommended. Always agree on the price in advance and never get in a car with people other than the driver. St. Petersburg is also home to the tourist-favorite Uber.

FLIGHTS, ACCOMMODATION AND MOVEMENT IN ST. PETERSBURG
Tagged on: Russia